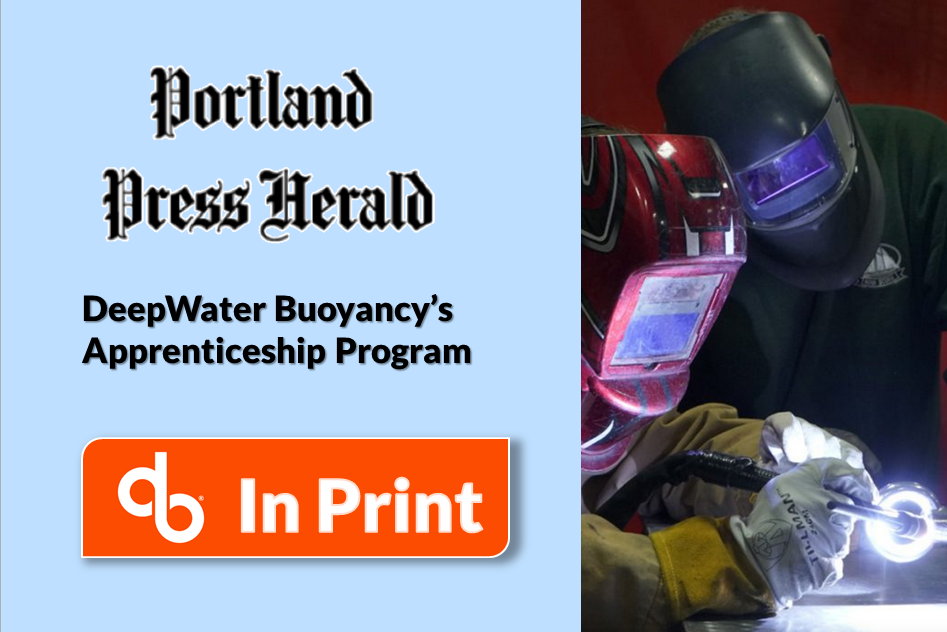 DeepWater Buoyancy was found In Print in Monday’s edition of the Portland Press Herald.  The regional paper highlighted the company’s participation in an apprenticeship program with the local technical school.  As a company staging for future growth, locating and developing skilled personnel is essential.  As such, the company is investing in local students as they begin their journey into the workforce. 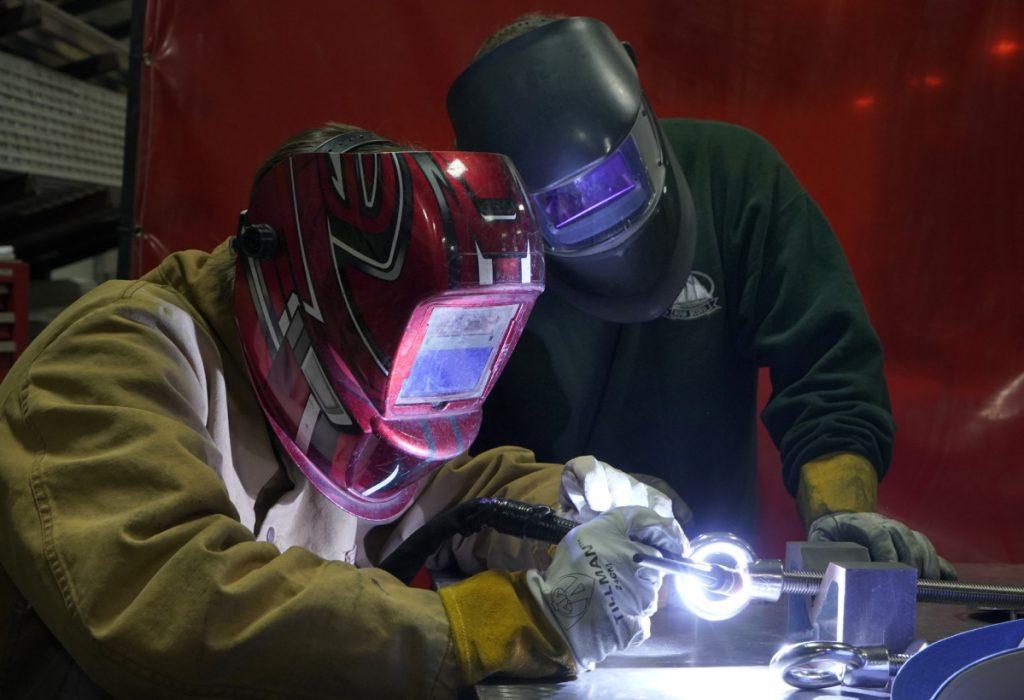 BIDDEFORD — Each weekday morning, Sam Roy heads to work. Alongside experienced welders at DeepWater Buoyancy, he spends five hours polishing, bending and cutting metal. Then he clocks out and heads to class at Biddeford High School.

Sam Roy, left, and Joe Woods prepare parts to be welded at DeepWater Buoyancy. Co-owner Matthew Henry said welders are in short supply. “The best thing we can do for him is show him all the skills he’ll need beyond welding,” Henry said.

Roy’s paid internship at the Biddeford manufacturer of sub-sea buoyancy products is a first for the company and the Biddeford Regional Center of Technology, and is an example of how Maine schools can prepare students to take advantage of a large, unmet demand for workers in the trades.

However, the arrangement wasn’t possible when Roy, 17, first discovered his love for welding because of state labor laws that prohibited teens from working with hazardous machinery. Roy and a bipartisan group of lawmakers first had to change those labor laws.

The revisions to the Hazardous Occupations Law for Minors allow students to work and earn money while enrolled in a cooperative or vocational training program. The changes added an exemption for students under 18 enrolled in a career and technical education – or CTE – program to work for short periods of time under the direct supervision of a fully qualified and experienced adult. The rules require the CTE program to provide basic safety training to students and to continue to oversee students’ education.

Sen. Amy Volk of Scarborough, who proposed the amendment with Reps. Martin Grohman and Ryan Fecteau of Biddeford, said the changes benefit both students and local businesses like DeepWater Buoyancy that are trying to attract skilled workers.

“Welding is a talent that is incredibly important to industry in Maine. That’s why, as a committee, we felt it was important to do everything we could to enable the next generation of students interested in a technical career path such as engineering, plumbing, automotive or nursing, to name a few, to succeed,” said Volk, Senate chairwoman of the Legislature’s Labor, Commerce, Research and Economic Development Committee.

The concept of matching students with local companies isn’t new at the Center of Technology or at the 26 other career and technical education schools around the state, but educators and tradesmen say changes were necessary to give students the experience they need to enter the workforce and fill gaps in trades that have a hard time attracting new workers.

“In the past 20 years, I’ve seen such a great need for skilled labor,” said Jim Godbout, owner of Jim Godbout Plumbing and Heating. “There used to be a lot of families going into the same trade for generations, but you don’t see much of that anymore.”

There are now more people in Maine aging out of the workforce than entering it because of a large drop in the number of births after the 1980s, according to the Maine Department of Labor. That has left gaps in some industries that are not attracting as many skilled workers as needed.

Those gaps are felt especially hard in the building industry, where the average age of plumbing and heating contractors is now over 55.

“They’re retiring and no one is coming into the trades,” said Alice Ames, executive director of the Plumbing-Heating-Cooling Contractors Association of Maine.

Paulette Bonneau, director of the Center of Technology, said internships allow students to gain real-world experience while also exposing them to career opportunities they can pursue without leaving the state.

“They see there are a lot of cool things happening in Maine they can be a part of. This is key for us in the state,” she said. “There are so many neat things going on in the industry here in Maine.”

Skills Not Learned in School

Last year, over 90 percent of Maine CTE high school students graduated, compared with 60 percent of their peers, according to a study by Educate Maine and the Maine State Chamber of Commerce. Many students leave CTE centers with industry-recognized certifications and technical certificates that allow them to go right to work out of high school. Some of those certifications can be carried over as credits in college.

The Biddeford Regional Center of Technology is open to students from Biddeford High School, Thornton Academy and Old Orchard Beach High School. It offers 16 courses of study ranging from welding-metal fabrication to early childhood education to business and financial management.

The center last year added a plumbing program that now includes more than a dozen students.

“This is not your grandfather’s vocational school,” Bonneau said. “The technology high school setting of today is focused on academic rigor, work ethic and people skills that traditional high school students often are not exposed to.”

Roy was introduced to the Center of Technology during a technology course he took as a sophomore. The teacher taught Roy and his classmates about multiple options at the center, but it wasn’t until a trip to the welding class that Roy’s interest was truly sparked.

“Something just clicked,” said Roy, who comes from a family of toolmakers and machinists. “I found it more interesting and unique than anything I’d done before.”

Roy said he felt energized to study welding and threw himself into the course during his junior year. Last year, he became the first junior at the tech center to obtain an American Welding Society certification.

Matthew Henry, co-owner and plant manager of DeepWater Buoyancy, said good welders in Maine are in short supply and the company was happy to partner with the Center of Technology so it could bring Roy to work.

“He’s essentially just another employee,” Henry said. “The best thing we can do for him is show him all the skills he’ll need beyond welding.”

Roy doesn’t have the welding skills necessary to do the same work as experienced DeepWater Buoyancy employees, but he said he is constantly learning from his mentor and other workers when he’s on the job. He undergoes the same extensive safety training and also is learning about things like blueprints.

Roy, who will attend Eastern Maine Community College after graduation, said he believes his future career in welding will allow him to stay in Maine or bring him to places like Canada and Alaska to work as a pipefitter.

“With other jobs I’ve had, it doesn’t have the same level of satisfaction of getting something done that benefits other people,” he said.

Since January, Oloya, a senior from Biddeford High, has spent up to 24 hours a week working with Godbout’s more experienced employees. He earns $12 an hour, but that could go up by $1 or $2 an hour by the end of the summer as he learns new skills.

So far, Oloya’s work has included fixing toilets, repairing a commercial shower at the YMCA and helping a service technician identify and address home heating problems.

“He’s not just working, he’s doing,” Godbout said. “He’d love to work a lot more and we’d love to have him. He’s super eager to learn.”

Oloya started in the plumbing program at the center during its first year. It was interesting, he said, but it wasn’t until the hands-on part of the course began that he really got excited about his future career.

“I’m not a person who stays in an office all day. I like to put things together,” he said. “I thought of myself 10 years from now and said, ‘I can do this.’ ”

Oloya, who was born in Uganda and moved to the United States 15 years ago, said he has found he most enjoys doing repair work because it allows him to help customers directly. He also likes the idea that he can pursue a career in the community where he already lives with his mother and 10 siblings.

In the fall, Godbout will pay for Oloya to attend a 12-week advanced training program with the Maine Energy Marketers Association. Godbout said he is willing to invest in young people like Oloya who have a strong work ethic and are serious about building a career with his company.

Oloya and Godbout will sign a contract saying Oloya will continue working for the company after his training.

“It’s a great opportunity,” Oloya said. “I’m getting my brain working a lot. I’ll learn lots of new skills and I like that a lot.”

Godbout said he is encouraged to see more students becoming interested in the industry, and he thinks the opportunities for paid internships will grow “by leaps and bounds” because so many plumbers and electricians are eager to work with young people getting into the industry.

“It’s a great opportunity for these students,” he said. “You can’t buy an education like that.”

The story was also run in video as well.