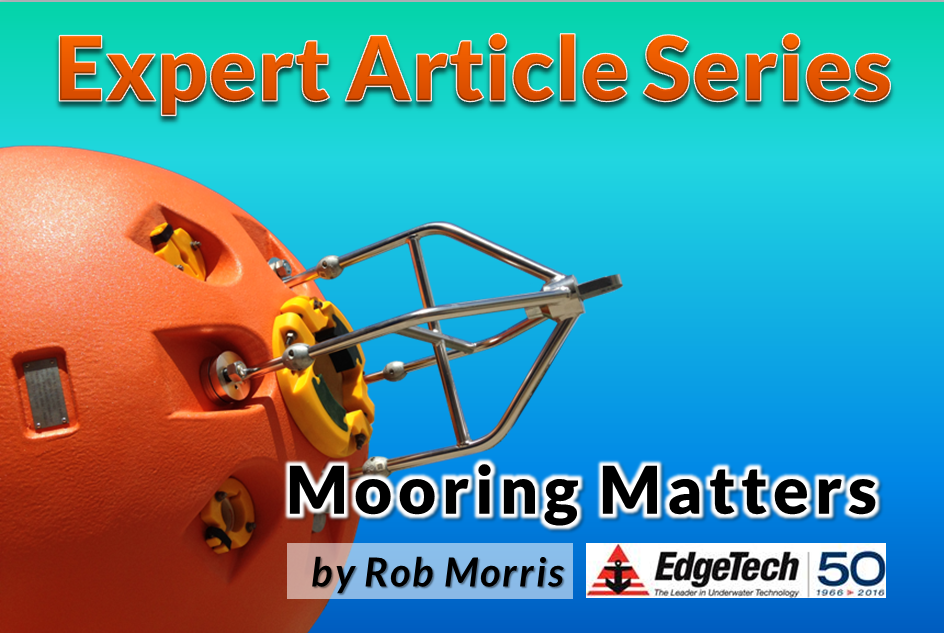 For the next installment in our series of technical articles, Rob Morris, Product Line Sales Engineer for EdgeTech, examines how to choose the proper acoustic release for an application.

The choice of release depends on many factors, such as water depth, length of the deployment, release load and lift load, and expected ambient noise. Biofouling or silting can also be a problem in some areas and should be taken into consideration as well.  Following are some examples of applications and the related solutions. 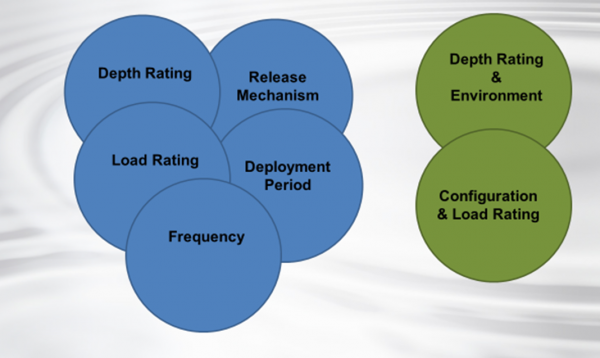 Factors affecting the selection of an acoustic release.

In this case, I would recommend a deepwater acoustic release with full transponding capability that can handle a large anchor (1000kg or more).   Because of the cost of the mooring instruments and the value of the data, it is critical the mooring be recovered. Therefore, a tandem release set-up for redundancy would also be desirable.

The transponding capability (tilt, release status and ranging) is very useful for deepwater operations to locate the mooring before releasing, to receive release status, and to track the mooring as it rises to the surface. Please also consider that depending on depth and how much buoyancy and drag the mooring has, it could take up to an hour for the equipment to reach the surface. (See Jon Wood’s article on buoy ascent here. LINK) And if there are subsea currents in the area the mooring could be a couple of miles away when it finally reaches the surface.

Shallow water and a heavy load

Sometimes scientists and ocean researchers find themselves in need of deploying a heavy package in shallow to mid-water settings and there is a desire to use an existing acoustic release that was acquired previously based on water depth requirements, but not release loads.  To address the situation a strongback can be added to the acoustic release as a cost-effective way to increase the release and lift load rating of a mid-water acoustic release.

Deploy an in-line mooring in shallow water in harsh environments, such as the High Arctic, for 1 year

Because of the remote location and the harsh coastal environment, the PORT MFE (Push Off Release Transponder) is ideal for deployments of this kind.  The mechanical drive off system is the best choice for deployments where normal release mechanisms can experience growth or sediment build up. Unlike traditional releases that use a metallic lever mechanism for their release function, the PORT uses a non-corrosive link that is physically pushed off of the unit when commanded.  This eliminates the often troublesome issues of biofouling and corrosion that causes failures in other units.

Here is a real life example of this.  20 moorings were deployed to log fish tracking information in a remote area in the High Arctic.  The user planned to recover the moorings in 12 months, but due to weather conditions and the inability to schedule ship time, the moorings were left in place for 4 years.  When the user finally made it back to the deployment site, they were very happy to recover all 20 of the releases. The Push Off Release mechanism easily overcame the heavy marine growth that had built up over 4 years.

The releases were covered with so much marine growth they can barely be seen in the photo below.

Sometimes there are regulations that require all equipment to be removed from the seafloor when the job is completed.  Sometimes the solution for this application would be to use a Pop-up system. A Pop-up system combines the acoustic release, flotation and line in one package. When acoustically commanded by a deck unit, the acoustic release and the top portion of the pop-up package will float to the surface. The release and surface flotation remains connected to the bottom section by a high strength synthetic line for easy retrieval leaving nothing behind on the seafloor.

Often science and commerce work in the same space.  So in the case where instruments need to sit on a seafloor where trawling is done, the solution is a TRBM (Trawl-Resistant Bottom Mount) with integrated flotation and an acoustic release. 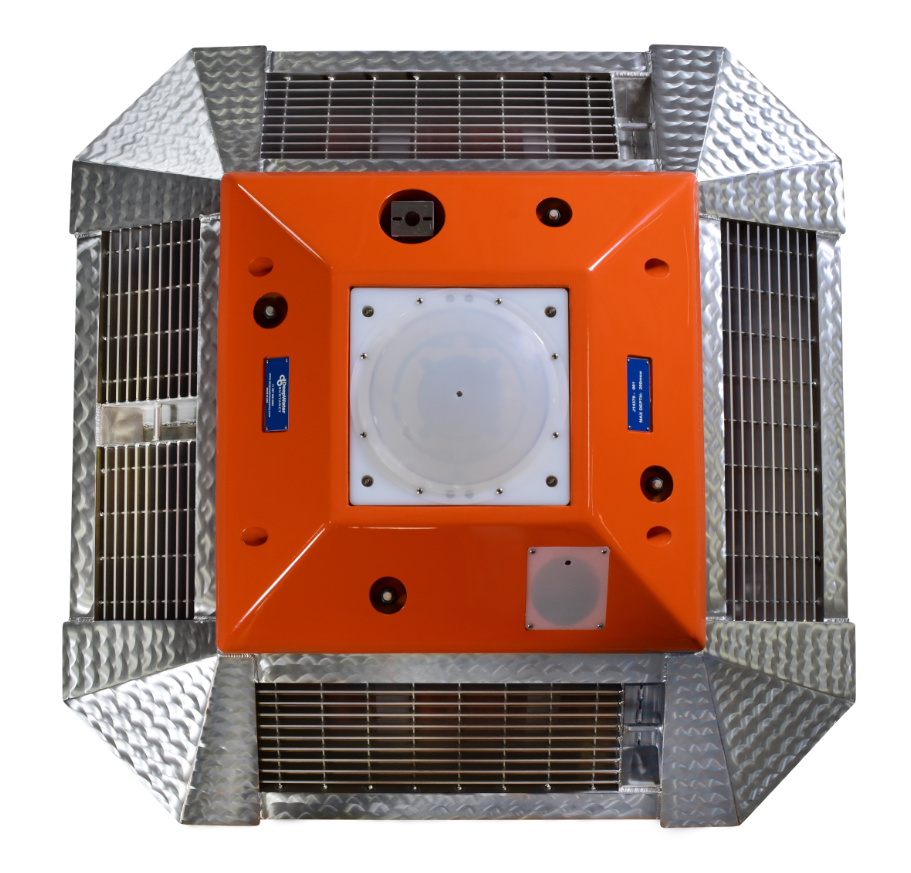 In this design, all the instruments and an acoustic release are integrated into a low-profile, trawl-resistant, deployment package.  When commanded, the release activates and the flotation module will rise to the surface with all the instruments.  The float has a line attached to it that is also attached to the ballast on the seafloor so that everything can be recovered.  In some instances a dual release arrangement is also used within the TRBM. 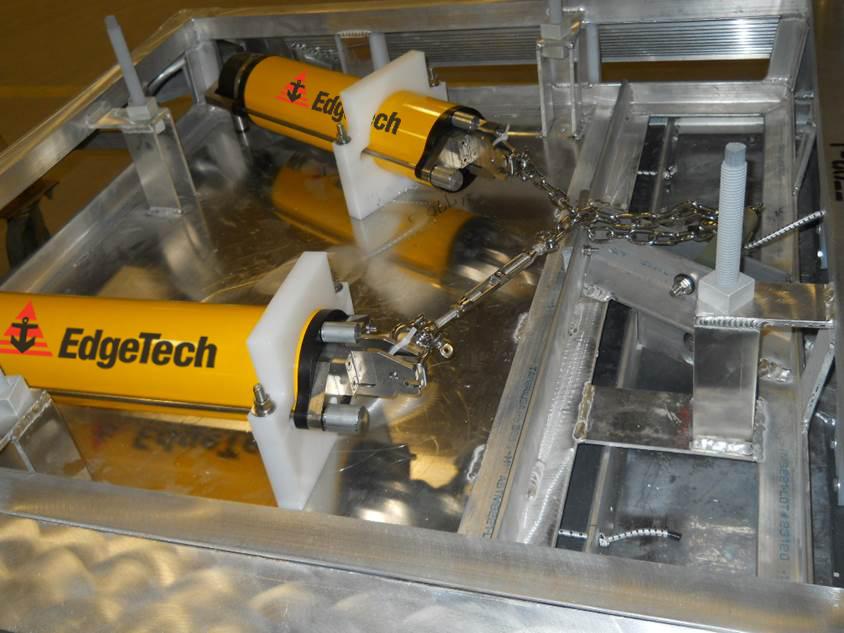 No matter what application you have, choosing the correct release is an important decision.  If you are not sure what release to use for your application I am always available to help.