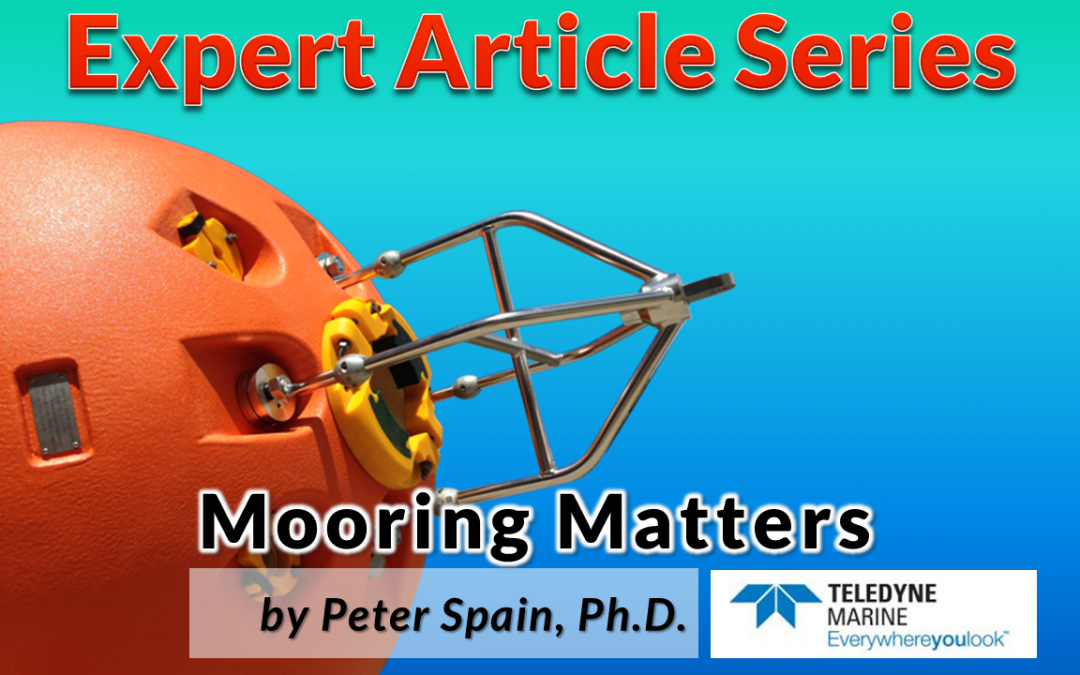 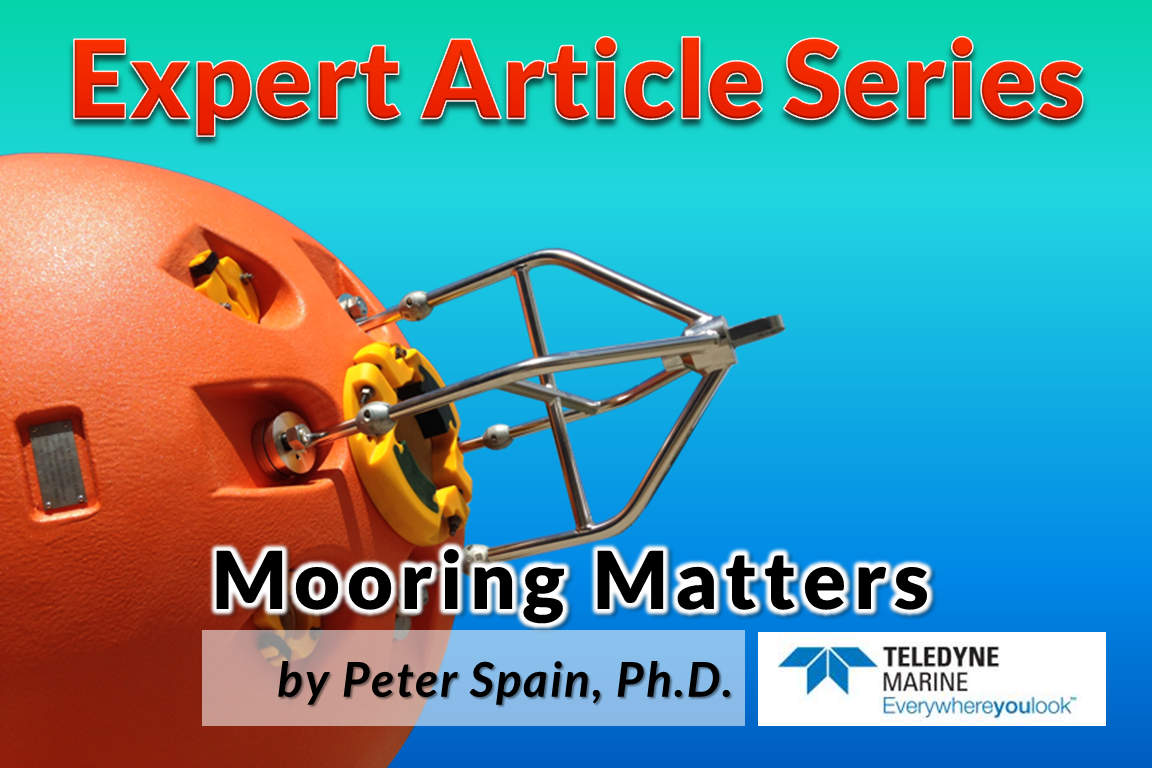 For the next installment in our series of technical articles, Dr. Peter Spain of Teledyne RD Instruments discusses the development of ADCP technology and the use of syntactic foam buoyancy in subsea moorings for sustained measurements of ocean currents.

In Part 2 of this article Dr. Spain presents examples of moored ADCP arrays from around the world.

If you missed Part 1, find it HERE.

Moored ADCP Arrays Around the Globe

Located off the east coast of southern Africa, the Agulhas Current is one of the world’s major currents. It exerts diverse influences, ranging from marine transport and local biodiversity to earth’s climate system.

Different parts of the Greater Agulhas System exhibit complex circulation patterns that can change substantially from year-to-year. To understand and assess causes for this variability, scientists began studying currents that feed the Agulhas.

In 2003, the Dutch research organization NIOZ and its partners began Long-term Ocean Climate Observations (LOCO). This effort included a long-term observational program off the east coast of Africa at 17°S.

The researchers installed an extensive array of tall moorings across the narrowest part of the Mozambique Channel. The LOCO project redeployed the mooring array several times. The full array was sustained for seven years and a reduced array even longer.

During LOCO, the upper 500 m contained the strongest currents. During several settings of the array, many moorings were topped with upward 75 kHz ADCPs from Teledyne RDI. 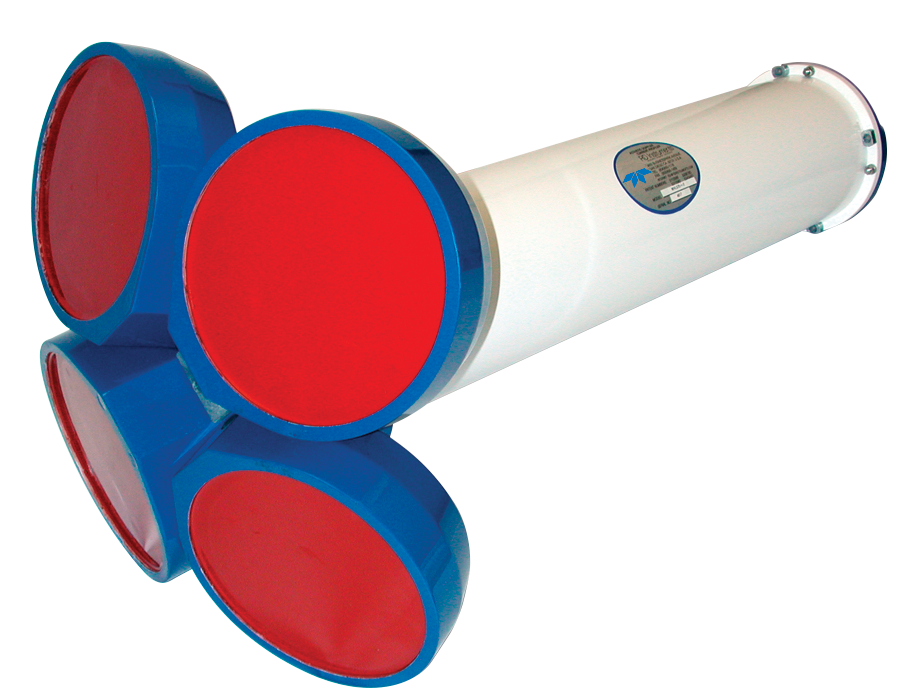 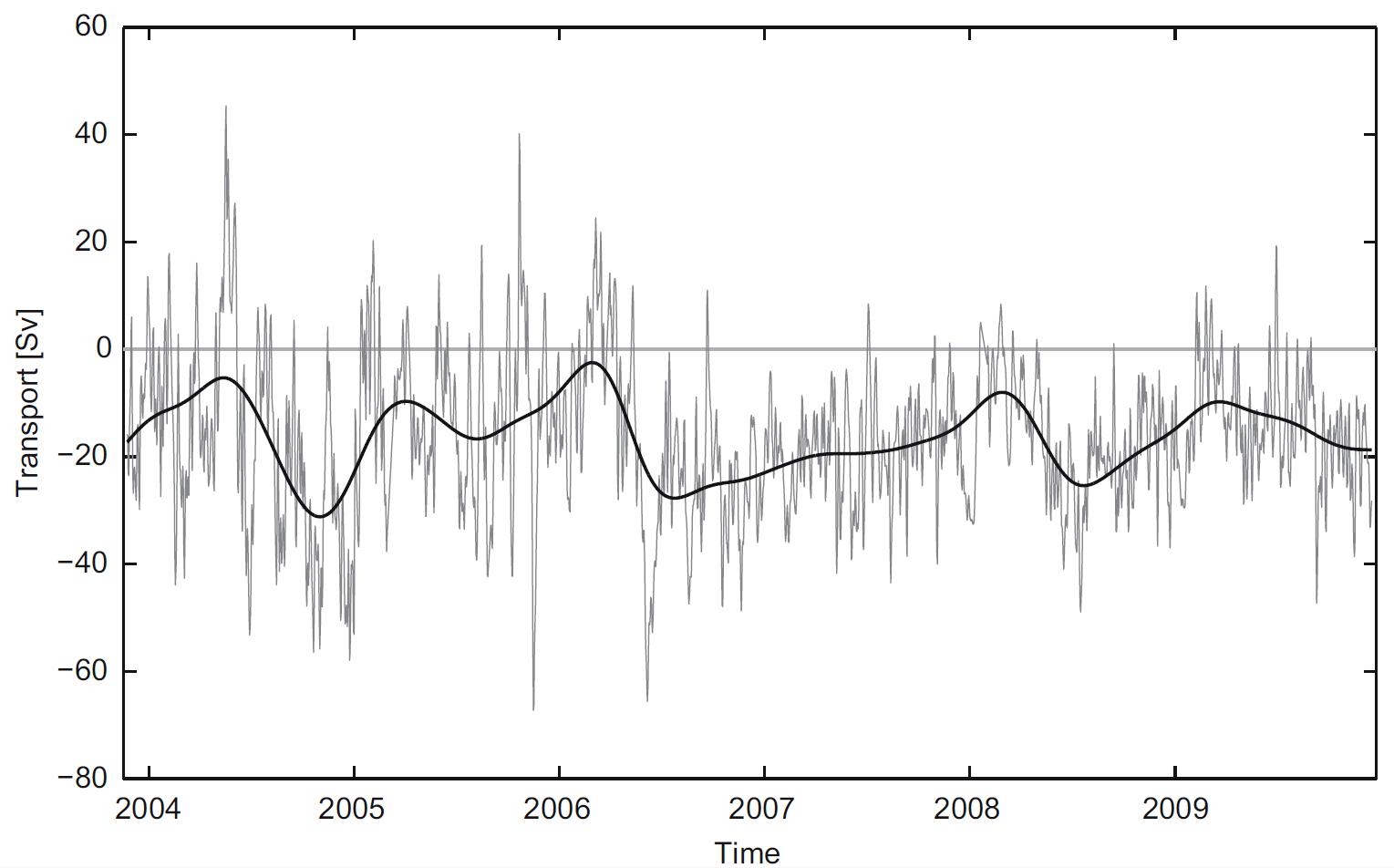 The design of these LOCO moorings built on experience at this site. An initial 12-month mooring campaign had recorded currents much stronger than expected. This led to difficulties with mooring blow-over and instrument loss.

Even so the observations revealed intriguing findings. There was no persistent Mozambique Current; rather, transport through the Channel were due to a regular train of large (300-km diameter) eddies. 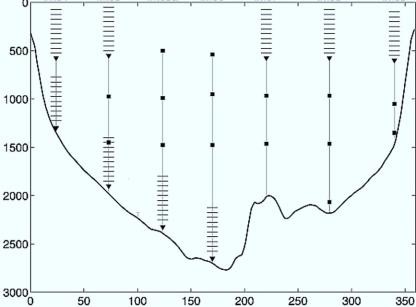 The LOCO moorings included many elliptical floats to reduce drag in these strong currents. These changes reduced subsequent blow-over excursions to tens of meters.

The data set spans many years with consistently impressive spatial coverage across the Mozambique Channel.

At interannual time scales, the variation in transport was larger than seasonal. Although large-scale climate fluctuations were identified to be the cause, the response in the Mozambique Channel was delayed almost a year.

Exposing these changes over time – and their subtle climate connection – was possible only with the sustained measurements from the moored array. Surface drifters, floats, and gliders are quickly swept away by strong surface currents.

In recent times, the role of the deep ocean in the global climate system has gained wider attention. Cold, dense waters sinking in the Nordic Seas supply the deep circulation of the global ocean.

Using seabed-mounted ADCPs, there has been long-term monitoring of these waters where they move through deep channels in overflow regions, such as Faroe Bank Channel. More recent studies have looked above the seabed plume at sites downstream from the Channel. This work uses moored ADCPs.

A key element in achieving this coverage was the use of Teledyne RDI ADCPs mounted in DeepWater/Flotec’s syntactic foam buoys. The ADCP time series helped to describe the variability in eddy action and the dominant periodicity. Also, the ADCP profiles showed the velocity signal reached through the water column.

Researchers at University of Bergen (Norway) wanted to clarify how the cold, deep plume changes due to entrainment of overlying ambient water. Of interest are the final volume of the plume and how its water properties have been altered before confluence with other deep flows. For these features provide the persistent signature of these waters in the deep global circulation.

Field work used a range of sensors and methods. Researchers wanted to see motions across diverse time and spatial scales. In particular, the researchers used moored ADCPs to span the whole plume. Mooring observations were merged with satellite observations and computer-modeling results.

Just downstream of the Faroe Bank Channel, an array of eight moorings measured currents for one year. The moorings were mostly in two lines located in quite different terrain. The first was in a confined channel about 25 km from the main sill. The second was 85 km downstream where the flow is less constrained. Moreover, by that distance, turbulent motions prevail with enhanced mixing through the plume.

The moorings carried Teledyne RDI ADCPs at various frequencies: 75, 150, and 300 kHz. ADCPs closer to the plume were housed in elliptical floats to reduce drag. ADCPs at higher altitude were mounted in spherical floats. Some of the latter carried both up- and down-looking ADCPs. 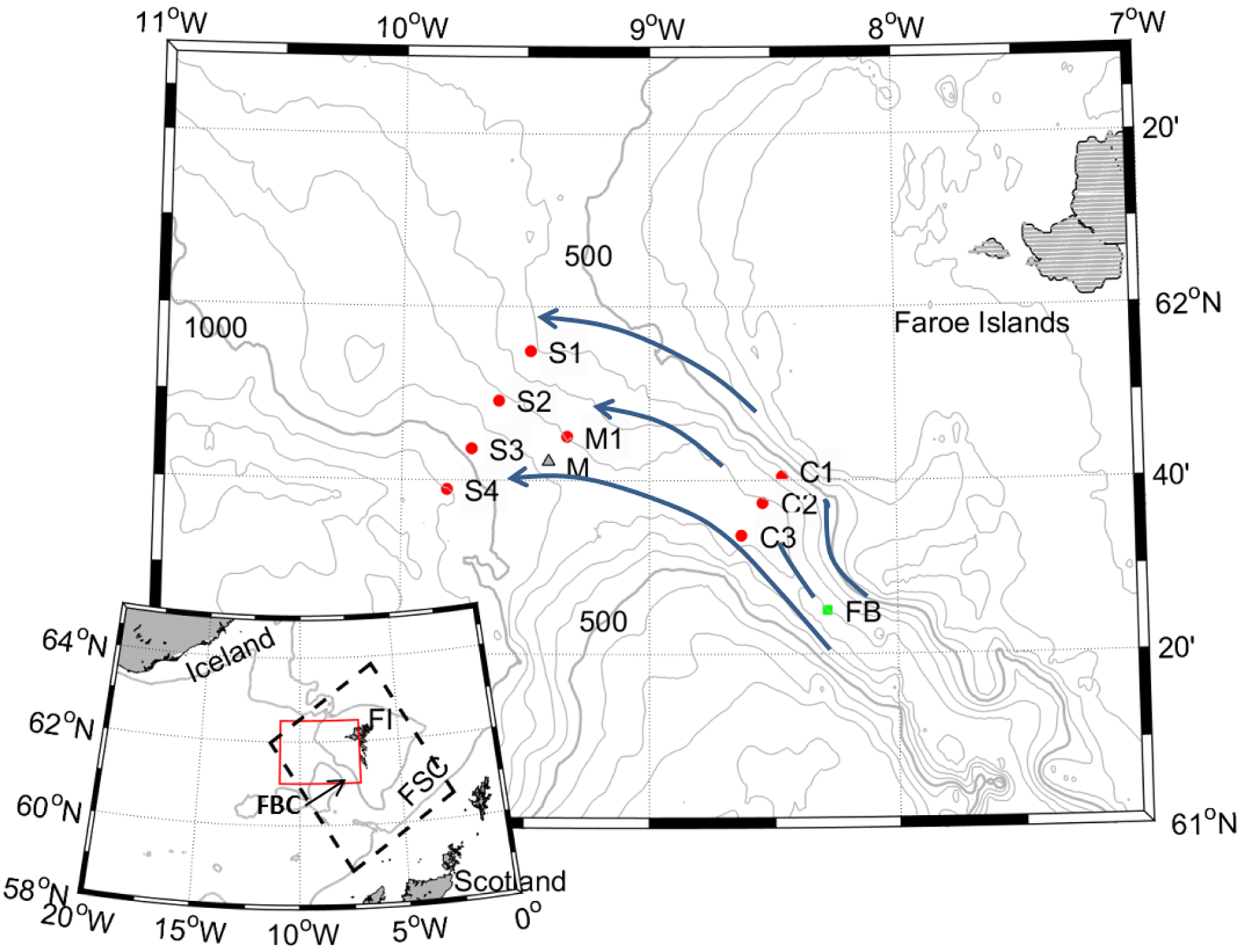 Three 300 kHz ADCPs were dedicated to studying mixing processes. They sat in the core of the plume and profiled its upper interface with high resolution in time and in the vertical.

The currents within the seabed plume are quite strong – almost 1 m/s at the first line. By the second mooring line, the speeds had mostly dropped though the vertical extent of the plume had increased substantially. Of interest was the plume’s high-speed core; it was more confined and had gained speed – due to moving downslope.

To examine blow-over effects on the moorings, the researchers used Richard Dewey’s software for Mooring Design and Dynamics. They constructed time series of the vertical position and tilt of the instruments using measured currents as input. Ground truth was provided by records from pressure sensors.

The researchers wanted to capture the behavior of the whole overflow plume – especially its structure and variability. The farther section had distinct differences, showing strong eddy motions that varied over 3-5 days. Also, the transport of the plume had increased by 30% at that line. The researchers were especially surprised to see how the plume’s volume was altered: not just gaining volume by entraining overlying waters but by losing colder deeper water.

Capturing any changes in the volume and makeup of the cold, dense overflow plumes is demanding. Yet this information is vital for improved understanding of the mechanisms of the deep circulation. For climate studies, sustained measurements from moored ADCP arrays provide a unique time-series view of these deep, narrow, and strong flows.

The East Australian Current (EAC) commands the western edge of the South Pacific. Fed by tropical waters, the EAC moves warm water southward for 2500 km along the Australian coast. Its transport is about 20 million cubic meters per second – about 40 times the Amazon River’s discharge.

Near Coffs Harbour on the north coast of New South Wales, much of the EAC turns eastward across the Tasman Sea towards New Zealand. Some residual flow moves farther south, largely as energetic eddies.

Seasonal and decadal changes in the southern extent of the warm EAC water have been attributed to altered atmospheric conditions – notably wind patterns. Casualties of changing water properties range from fisheries to kelp forests.

From April 2012, Australian scientists deployed an extensive mooring array across the EAC. This work was part of the Australian Integrated Marine Observing System – IMOS. Installed for 16 months at first, the array has been redeployed. The researchers selected a location at 27°S to discern the typical state of this major boundary current. Farther south, energetic eddies cloud the description. 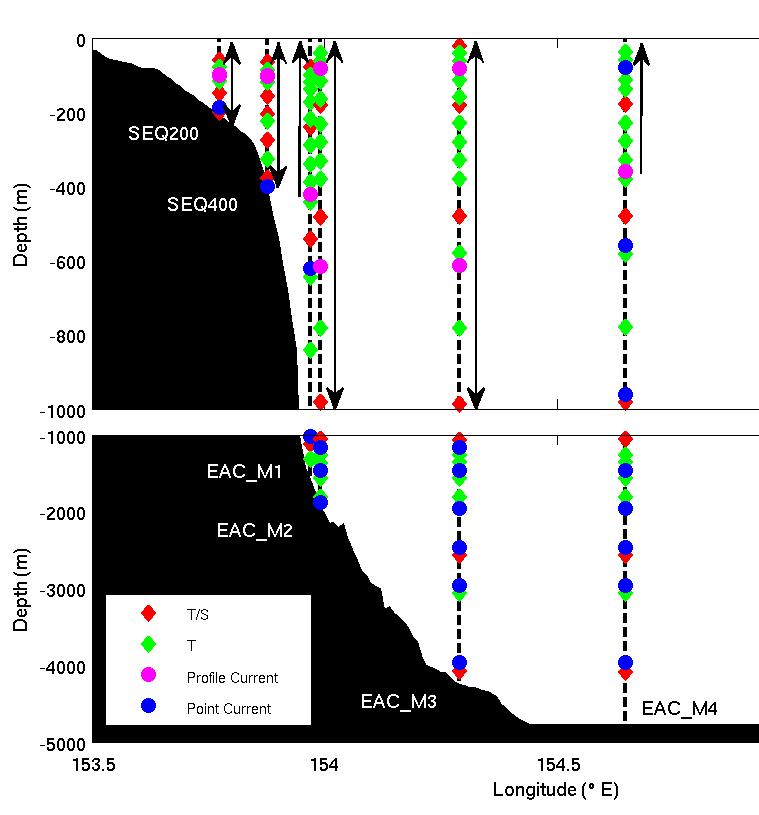 Across the continental slope, each mooring carried up- and down-looking ADCPs. They were combined to profile currents to 1000 m depth. Throughout the array, all ADCPs were mounted within DeepWater/Flotec’s spherical buoys of syntactic foam.

Moorings were fitted with many temperature and salinity probes for calculating fluxes of water properties. For measuring the upper ocean, these probes had to be immersed in the strong currents. Some issues with mooring blow-over followed.

Most moorings were over the continental slope where the poleward Current is generally located. Two moorings were located farther offshore in 5000 m depths to capture the width of the EAC system.

In fact, large equatorward transport was observed at the offshore edge of the mooring line – 27% of the poleward volume.

Averaged over the deployment, the ADCP measurements showed strong currents in the EAC are limited to the upper 600 m. A subsurface peak at 50-100 m depth provided a bullseye in the flow distribution. On average, poleward currents reached 1500 m; below that depth, currents were slight. For this situation, the volume moving poleward was 22 million cubic meters per second – about 70% of transport through the Florida Straits.

Snapshot views of the moored section showed the distribution of EAC currents to be coherent though very dynamic. At times, the EAC was concentrated over the continental slope whereas at other times it was wider and deeper. When the EAC was more confined, flows at depth could be equatorward across vast expanses. At other times, equatorward flow had disappeared.

Statistical analysis of the flow patterns showed two dominant modes where the EAC was either hugging the continental slope or centered farther offshore. In the latter mode, flows nearer to the shelf headed equatorward. These modes varied with multi-monthly periods that were attributed to remote forcing.

A large fraction of the Australian population lives on the eastern seaboard. The influence of the East Australian Current on their living environment is now more widely appreciated. Yet developing this understanding has been – and remains – challenging.