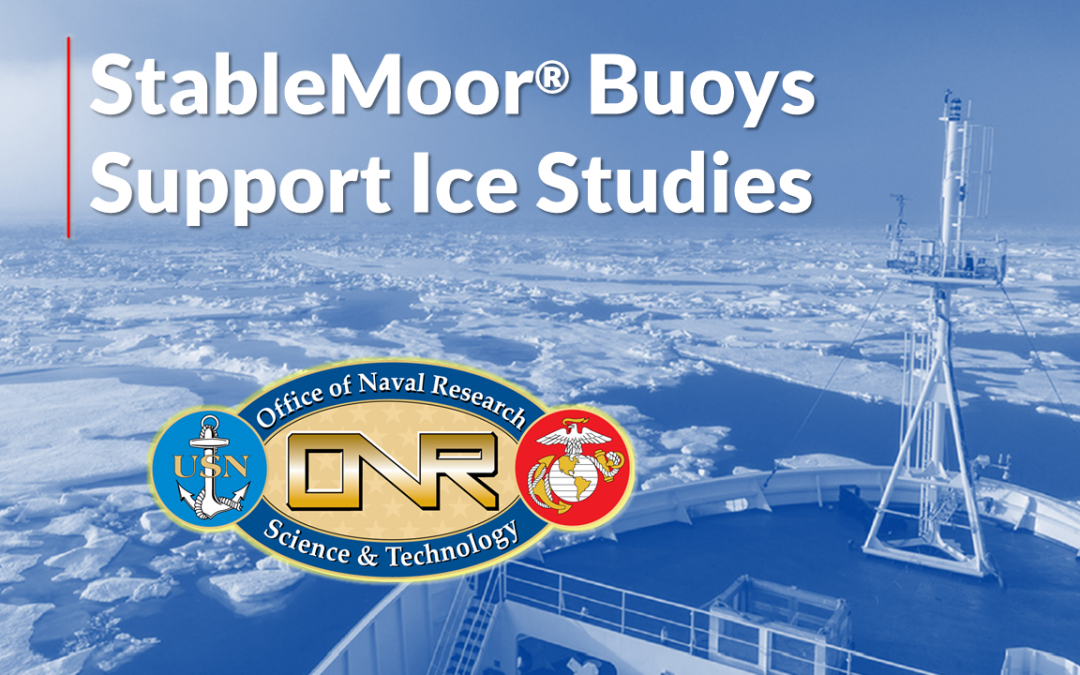 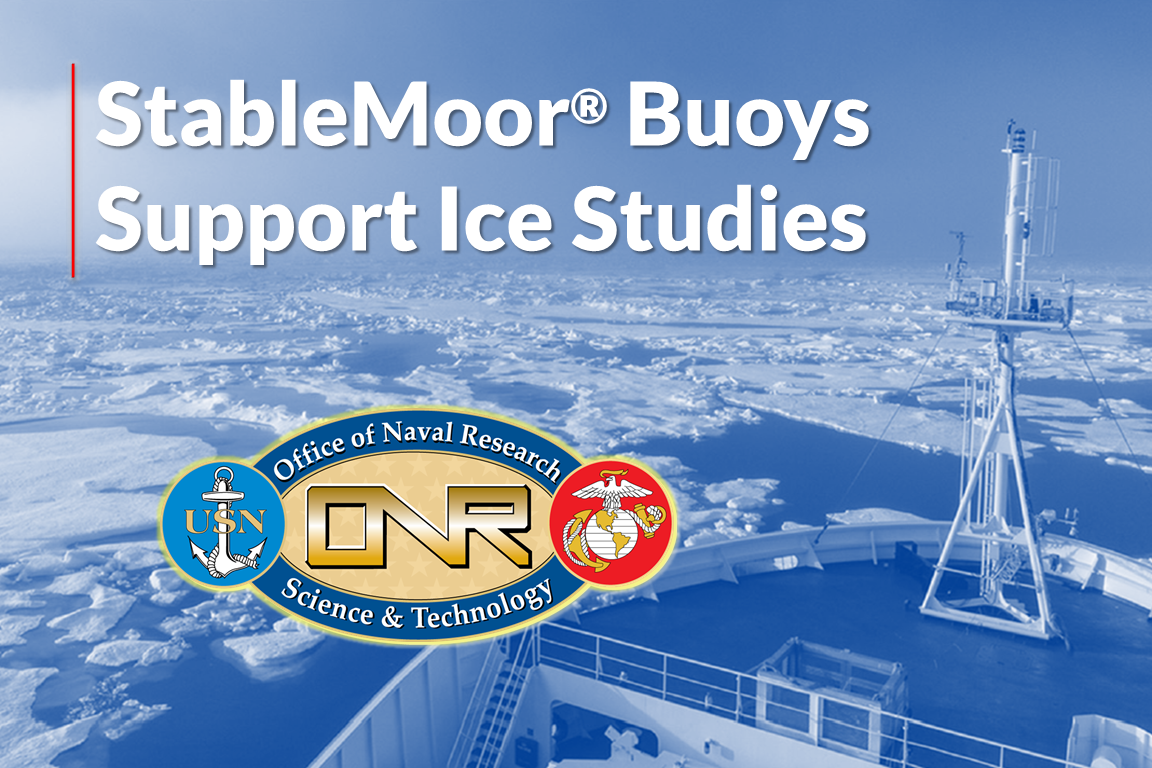 DeepWater Buoyancy’s StableMoor® Mooring Buoys have been chosen to support the “Stratified Ocean Dynamics in the Artic” (SODA) initiative headed by the Office of Naval Research.

The buoys were custom-designed and built to specifications provided by the University of Washington Applied Physics Lab and the University of New Hampshire.  These buoys will support instrumentation that will map the underside of sea ice in support of the research project. 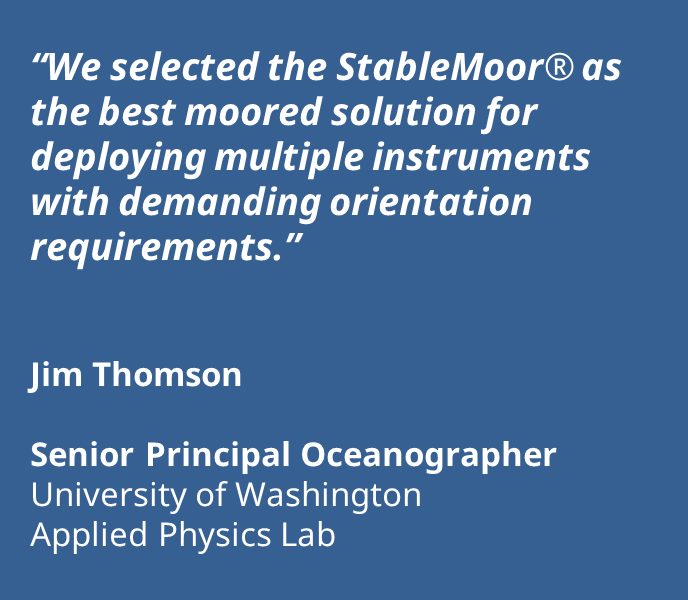 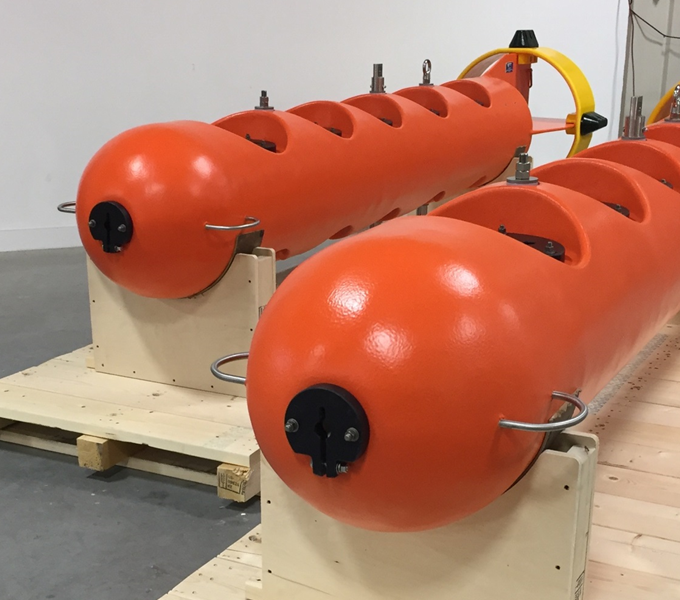 The pair of StableMoor® buoys were over 12 feet (3.5 meters) long in order to house the instruments required for the deployment.  Each unit was equipped with features to allow for an upward-facing ADCP, upward facing sonar, a velocimeter, and three battery housings.  Each unit provides 475 lbs (215 kgs) of buoyancy and is rated for 750 msw.

This product was chosen by the research team because of its unique performance characteristics. Specifically engineered for high current applications, the StableMoor® is designed to reduce drag and increase mooring stability in extreme flow regimes. By decreasing frontal area (compared to a standard spherical buoy) and increasing dynamic stability in high current areas, the StableMoor® minimizes mooring inclination and excursions.

The University of Washington team is well acquainted with the value of the StableMoor® design.  These two buoys add to their existing units that they have been working with for the past three years.  Some of these buoys previously supported a challenging NREL project studying high flow/turbulence sites for subsea turbines.

Learn about the NREL application HERE

About the Research Project

Vertical and lateral water properties and density structure within the Arctic Ocean are intimately related to the ocean circulation, and have profound consequences for sea ice growth and retreat as well as for propagation of acoustic energy at all scales. Our current understanding of the dynamics governing arctic upper ocean stratification and circulation derives largely from a period when extensive ice cover modulated the oceanic response to atmospheric forcing, resulting in weak seasonality, at least within the deep basins.

Recently, however, there has been significant arctic warming (Overland et al., 2016), accompanied by changes in the extent, thickness distribution, and properties of the arctic sea ice cover. Summertime sea ice extent has been declining since at least 1979 (when satellite-borne passive microwave sensors began providing comprehensive ice maps; Perovich et al., 2012), with a trend of –13.4% per decade relative to the 1981–2010 average (Figure 1; Perovich et al., 2015; Thomson et al., 2016). September sea ice minimum extents from 2007–2015 are the lowest in the 1979–2015 period, with a record minimum of 3.39 million sq km in 2012. 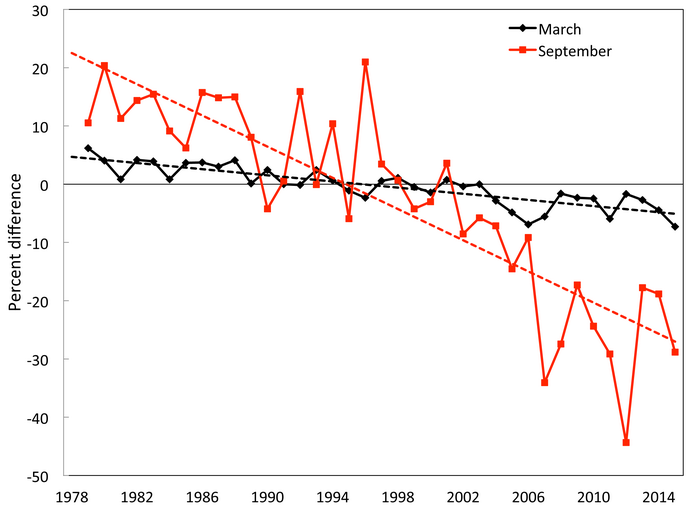 Figure 1. Time series of Northern Hemisphere sea ice extent anomalies in March (the month of maximum ice extent) and September (the month of minimum ice extent). The anomaly value for each year is the difference (in %) in ice extent relative to the mean values for the period 1981–2010. The black and red dashed lines are least squares linear regression lines. The slopes of these lines indicate ice losses of –2.6% and –13.4% per decade in March and September, respectively. Both trends are significant at the 99% confidence level. From Perovich et al. (2015).

Sea ice has become younger alongside the decreases in extent (Figure 2). Sea ice thickness typically increases with age, such that the combined trends toward decreasing extent and younger mean age point to a persistent loss of sea ice volume (Kwok et al., 2009; Schweiger et al., 2011). Thinner, younger ice tends to be weaker, more subject to deformation and fracturing, and thus more mobile and more likely to provide efficient coupling between the atmosphere and upper ocean. Furthermore, the growing summertime expanses of open water provide periods when the dynamics might more closely resemble those that govern the upper ocean at lower latitudes.

The need to understand these changes and their impact on arctic stratification and circulation, sea ice evolution, and the acoustic environment motivate the Office of Naval Research (ONR) Stratified Ocean Dynamics of the Arctic Departmental Research Initiative (SODA DRI).